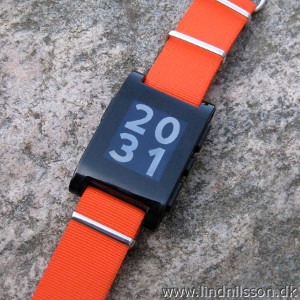 I heard about the Pebble Smart Watch Kickstarter project on one of the podcasts I listen to (I think it was Tech News Today) not long after the project launched in April 2012. Being a geek and also normally wearing a watch (which today sometimes seems rare, since most people use modern day pocket watches - AKA mobile phones - to tell time) I decided to support the project on April 19th 2012, at which time the project was already on its way to make Kickstarter records. I chose the "One Jet Black Pebble watch" reward.

This was my first Kickstarter backing, so I didn't know exactly what to expect. I have read stories about projects being severely delayed or not delivering the promised rewards. And in some cases this has resulted in lawsuits against the people who created those projects.

It seems to be a common misconception that Kickstarter is an online store. Kickstarter has even recently changed their guidelines to try to make it even clearer that it's a funding site and not an online store. As the Pebble project got delayed (caused by the big success resulting in the demand for a lot more units needed), I have seen a lot of comments on the project page mentioning that it should be possible to cancel an "order" as you can in an ordinary online store if the store is unable to deliver the product in time.

Personally I consider supporting a Kickstarter project as an investment. And as in all investments there is the risk of losing the investment, or that the project does not exactly follow the schedule laid out in the project description. But it is important to make sure that the investors are well informed during the process.

For the Pebble project I generally have felt well informed. But I would have liked a little more (and clearer) information when it became clear that the projected delivery date (September 2012) would not hold. The Kickstarter updates have contained information on the delay, but it would have been nice if a revised schedule had been released.

On March 7, 2013, I received the long waited message from Pebble that my Pebble had shipped. And less than a week later the package arrived in Denmark. I received a message from the Danish postal service telling me that I needed to pay VAT on the watch before I could get my hands on my new toy. And I also had to pay a fee to the postal service for calculating the VAT - $24 in VAT, $29 in fee. I did expect both of these, since the Pebble team had stated that they would use the Singapore postal service to ship the device to Europe, but I would have liked to avoid the fee to the Danish postal service. I think a fee of $29, for doing a simple multiplication of two numbers (shipment value * VAT rate), is a little steep.

Perhaps Pebble could have shipped all the shipments for the EU from within the EU (not Germany - because then no-one would have received their watches). Or they could have used a shipping provider that could handle VAT payment from the sending end. Both of these approaches would of course require that the VAT was charged to each final recipient, but I would expect that there are shipping providers that have the expertise in that. But perhaps the issue with finding a shipping provider that would accept shipments of devices with built-in batteries would make this difficult. On the Pebble Support Center pages it is mentioned that using other shipping providers than the postal service, often will be more expensive than the postal service, but I have received shipments with UPS from the US to Denmark, where the VAT was charged by the sender, for a shipping cost less than $15. Of course this is from a sender that sends a lot of shipments, but with the number of Pebble watches needed to be shipped perhaps Pebble could have negotiated a good deal with a company like UPS.

The design of the watch looks a little plasticky, and does feel a little bulky if your wrist is of a smaller size. The screen is quite easy to read also in sunlight, although I sometimes have problems reading the screen when wearing sunglasses, but I think it's caused by a polarization issue between the sunglasses and the display. I generally don't like rubber bands on watches, so I have replaced the default band with a NATO strap. Changing the band is very easy and the watch fits standard 22mm watch bands. In the beginning the battery life was not great but after a firmware update, I would now say that the battery life is quite good.

In everyday use I only use 2 different watch faces - Big Time (because of the big digits), and Simplicity (because it also shows the date). I also have some other watch faces installed, but those are only used when demonstrating the watch to friends and family - when they discover that it's not just a normal digital watch I'm wearing, they become very interested in seeing what it can do. And the possibility to control the podcasts playing on my iPhone is very handy during my daily commute.

I don't use the Pebble exclusively, but in periods it has been my primary watch. And when using it as my everyday watch I have come over some issues. But when trying to find out if there is a solution or workaround for these issues it has been difficult to find information. The challenge is that there are several places where you need to look to be sure that you have gotten all the information. There are the Kickstarter updates (and the comments to these), there is the Pebble Support Center, there is the forum and there is even information on Reddit. It would be nice if there was one place where you could see a list of known issues and the status of these issues. An article on the Pebble Support Center would be the most logical place for this.

One of the issues that I have is the iOS Mail Notification issue. In earlier versions of the help article on setting up notifications on iOS it was mentioned that you needed to simply turn the notifications for each mail account off and on again to get it to work. But the current article simply states that Pebble is working on mail notifications for future release (while the original work-around is still working). As long as you make sure that the Bluetooth connection between the Pebble and your iPhone is not broken, everything is fine. But as soon as the connection is broken, you need to set up the notifications again. I often leave my phone at the desk at work, and just going to pick up something to drink is far enough for the connection to break. In the latest Kickstarter update (#42) it is stated that the next version of the iOS app will solve this problem, but only for IMAP and Gmail. And this makes me believe that perhaps the Pebble app will be connecting directly to the mail servers. But what about Exchange mail accounts? I also get my corporate mails on my iPhone. And if the Pebble app is communicating directly with the mail server, the notifications on the Pebble and on the iOS device would not necessarily be in sync. But we will see when the iOS app gets updated. I may update this blog post when that happens.

Pebble has recently begun selling the Pebble watch in Best Buy in the US, and black Pebbles have also been sent to pre-order customers, even if not all Kickstarter backers have received their watches (non-black Pebbles). That could have been handled better. I can understand how some backers can get the impression that Pebble is thinking more on making money, than making sure that the people that made the success possible get their watches.

I will continue to use my Pebble. Not exclusively, since I also like to wear some of my analog watches. And I have not been scared off from smart watches or Kickstarter, because I have also backed the AGENT Smart Watch on Kickstarter. I will most likely also write a blog-post about that when the watch arrives (hopefully sometime in the beginning of 2014).

I would say that version 1.2 and 1.2.1 of the Pebble iOS App is a step in the right direction, since the limitations in the native iOS notifications require workarounds. And if/when they get support for Exchange accounts and perhaps get the Push functionality to work a little better I will be pleased.